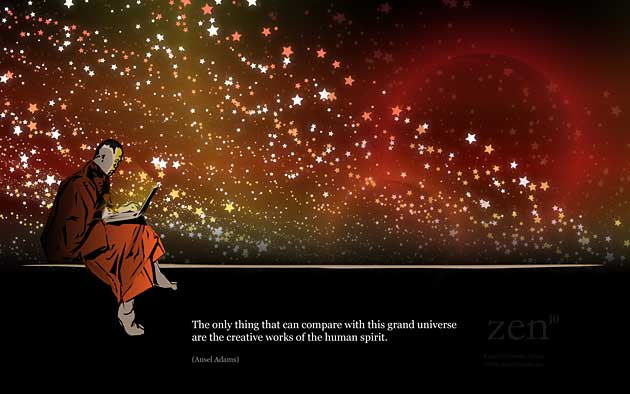 We are happy to release a free wallpaper designed by Dylan O’Donnell based on the stock “zen monk” photo. The wallpaper is downloadable in several different sizes and is best on a widescreen monitor.

How It Was Designed – Illustrator Notes

First, the monk photo was converted to black and white and levels blown out to make it a high contrast image that is easy to work from. Then in Illustrator the pen tool in stroke mode was used to draw few key lines around the head and robe. Then switching the pen to fill mode the rest of the lines and shadows are drawn as solid shapes. Finally another layer is added with some larger pen drawn shapes for shading and colour.

Then a single star from the default shape tool was used to create a custom “scatter brush”. Drawing a few lines (both straight and curved) and populating the lines with stars from the brush which was set to randomly size, scatter and rotate them. From top to bottom the lines are set with slowly decreasing stroke width to make the stars appear larger at the top and small and distant at the bottom.

To really set this illusion though, the perspective tool (a new feature in CS5) was used to map the star fields onto a vanishing point in the distance giving a wholly 3D effect. All up there are 3 layers of stars, one with a halfway opacity to seem distant also.

A gradient layer is inserted in between so there are white / yellow and red stars on separate layers and an outer glow effect added to make the stars “shiny”.

The hazy galaxy glow of the planets is added with a radial gradient that tapers of with 0% opacity on each end. A larger circle is used to create a subtle curved strip like a milky way band.

A black gradient was added to the bottom to form the kind of “space-bench” the monk ends up sitting on. A single line with an art brush gives a nice tapered edge and another layer of space-haze is added which a 3 bars of 30% transparent colours. The colours are intentionally warm red / orange / yellows to match the monk orange but purples, greens and blues look great as well.

The monk vector was then added to a new layer and some adjustments made to shading and colours so the direction of the light appears to be coming from the glow of the galaxy. A heavy dark gradient was used on the orange robe so he almost fades to darkness. Some slight yellow shapes and a 45 degree gradient are added to the face, hands and computer screen to create the computer glow.

And that’s it! After that text is added for the Ansel Adams quote and the logo as a subtle watermark.

This wallpaper is 100% vector based in Illustrator so can be increased to massive proportions and resolutions if required. You don’t need to rely on photoshop for really organic, soft effects. The massive number of stars in this artwork on the perspective grid sometimes pushed the Mac Book Pro it was created on to 100% CPU usage as it re-rendered layers and some slowdowns occurred but the final results are well worth it.

Leave us a comment if you liked this wallpaper and basic Illustrator tutorial!